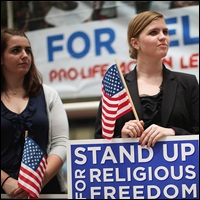 In 2012, hundreds of thousands of pro-lifers and people of faith took to the streets in a series of rallies to protest the HHS Mandate. Those rallies, held in hundreds of cities and towns across America, sent the message that we the people weren’t about to sit back and let the federal government trample our First Amendment rights.

Ignoring this groundswell of public opposition to the notion that employers should be forced to pay for insurance coverage for contraceptives and abortion-inducing drugs, the Obama administration pressed on, refusing even to back down from a challenge mounted by the Little Sisters of the Poor. But now, at long last, the popular opposition to this unpopular governmental overreach won victory as the Trump administration announced plans today to allow any employer or insurance provider to opt out of paying for coverage of contraception or abortion-inducing drugs “based on its sincerely held religious beliefs.”

The other side is manufacturing Texas-sized outrage over today’s action. Yet when major corporations like Pepsi, Exxon, and Chevron were initially exempted from complying with the HHS Mandate, there was nary a peep.

Think about that for a second and then ask yourself if this is really about “access” to contraception, as the other side claims.

In essence, today’s action merely restores the pre-2012 status quo, when employers were not forced to pay for coverage for contraceptives and abortion-inducing drugs, and no one believed they should be forced to do so.

And restoring the pre-2012 status quo is a victory for those who cherish the First Amendment’s guarantees of freedom of religion and conscience rights.

Posted in News and Commentary. Follow any responses to this entry through the RSS 2.0 feed. Both comments and pings are currently closed.